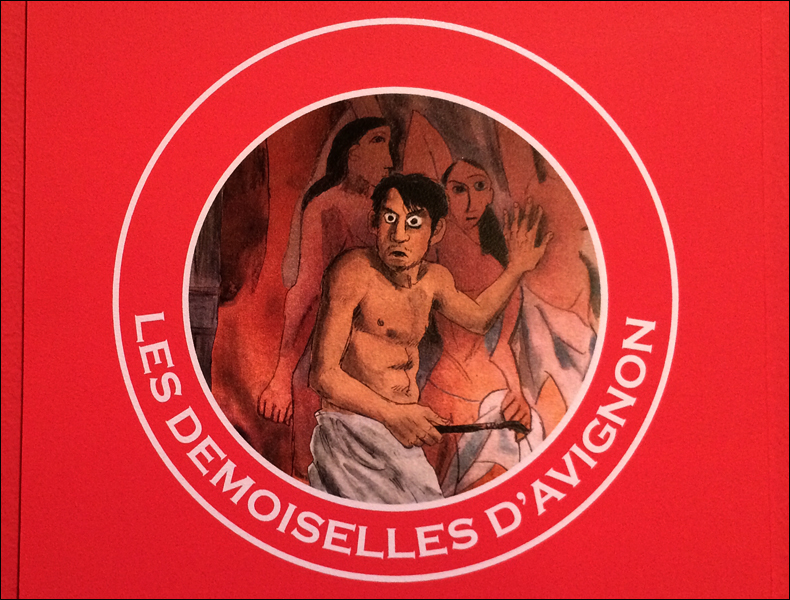 Comics – les bandes dessinées – are a phenomenon here. Their world has its own genres, its own festivals and celebrities. Every sizeable bookstore features its own BD selection, from classics and sci-fi albums to tomes by auteurs. 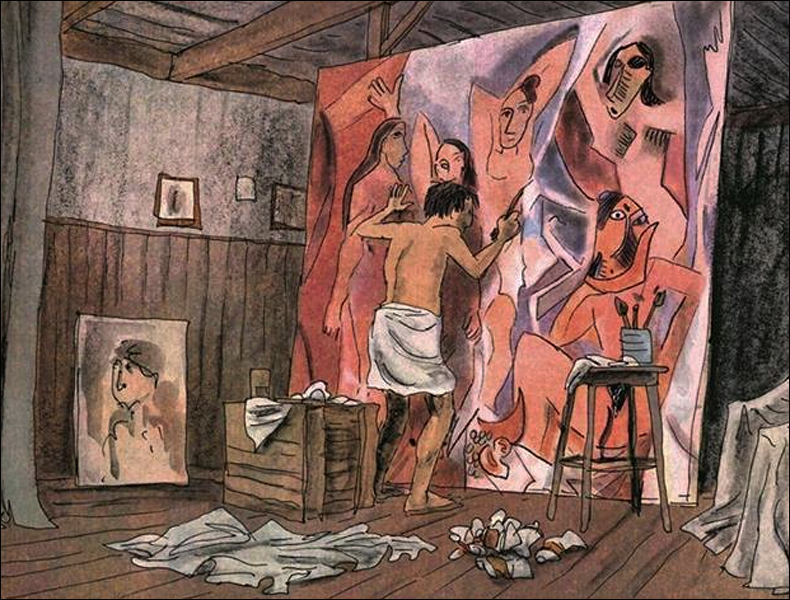 Julie Birmant and Clément Oubrerie’s PABLO is one of the latter. A graphic novel in four volumes, it deals with the young Picasso’s time in Montmartre. From Matisse to Gertrude Stein it features famous characters, as well as plenty of sex, art, poetry, death and rivalry. But what makes it a real achievement is the question at its centre: what made ‘Pablo’ into Picasso ? 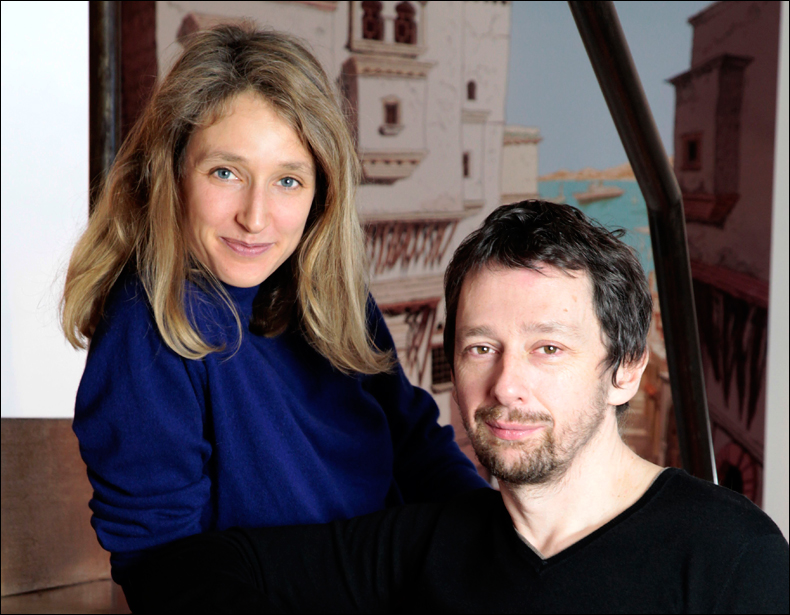 Now, the Musée de Montmartre has mounted a show about the books. Supposedly the oldest building in the quartier, this charming spot was home to artists like Auguste Renoir and Suzanne Valadon. (Renoir painted his famous The Swing in its garden). Most of the landmarks which made Montmartre famous can be seen out of the museum’s windows. 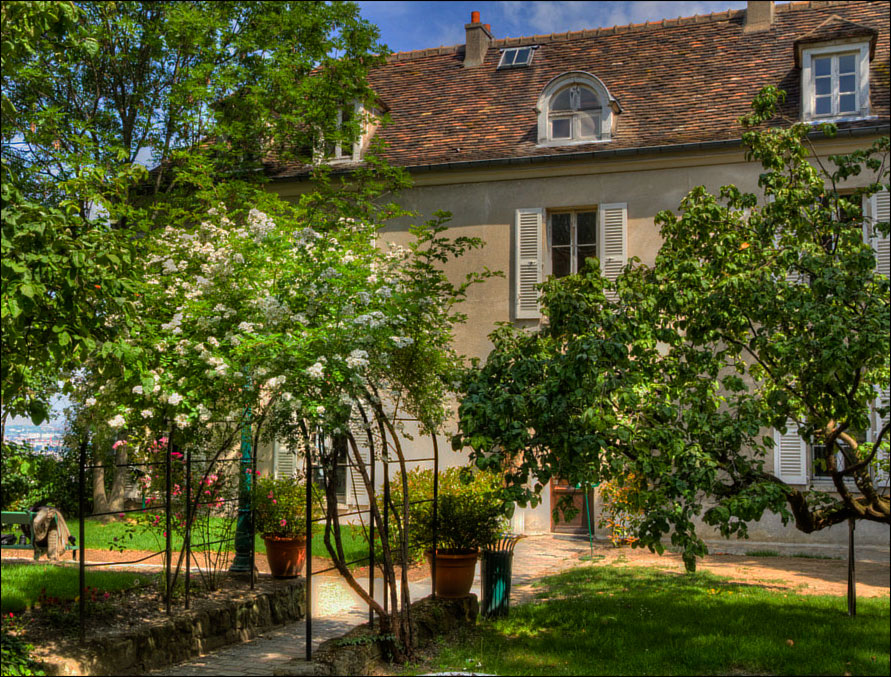 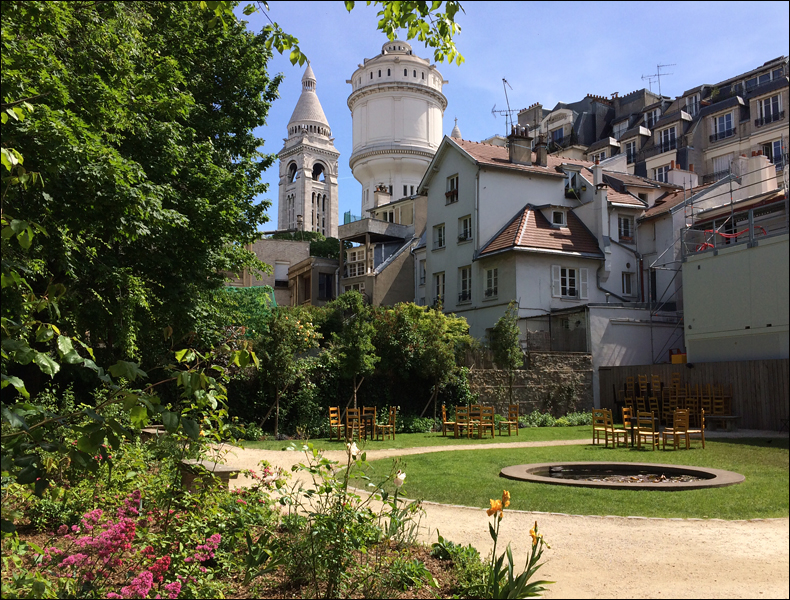 Montmartre’s were the streets in which Picasso’s genius was shaped. But, as Birmant and Oubrerie show, it didn’t happen by accident. The Spaniard who arrived in 1900 was unknown – and, at only 19 years of age, unworldly. Yet the city he found around him was the talk of Europe and that Catalan circle he joined was already part of it. Through them and through local neighbours, patrons, charmers and clowns, Pablo joined a singular circle of talents.

Life, however, was not easy; most of Montmartre’s artists and writers struggled from day to day. The bourgeois Spanish prodigy had to learn a lot – and quickly. What those around him noticed was how he did it all his way. 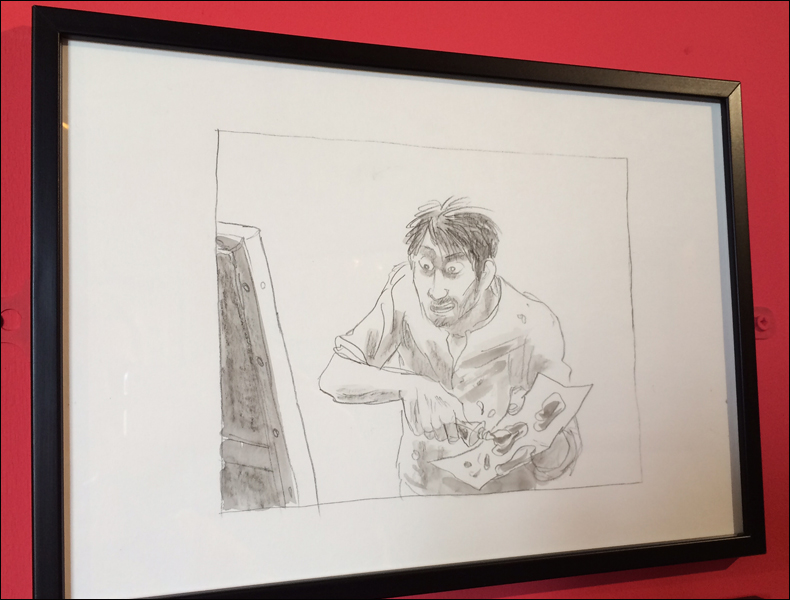 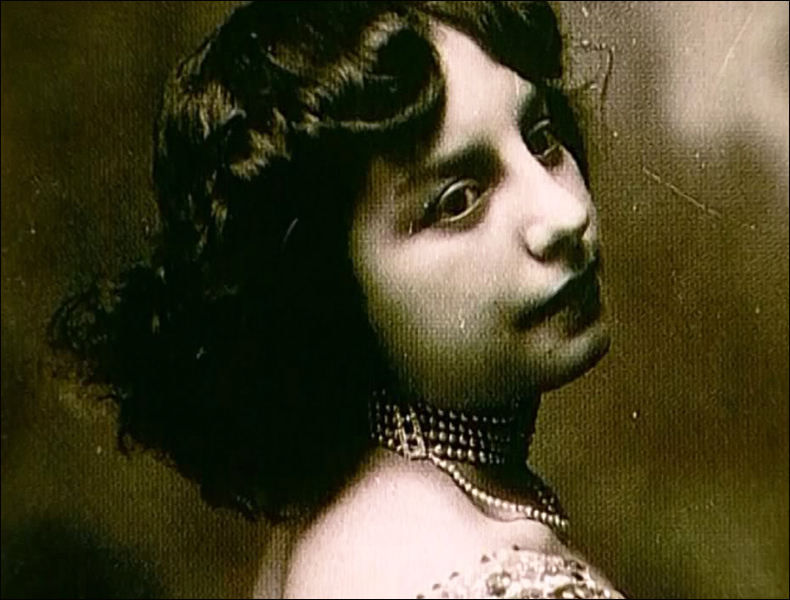 Birmant and Oubrerie’s narratives are based on real journals and memoirs: those of the artist’s first love, Fernande Olivier. Known around Montmartre as “la belle Fernande”, this beauty shared Picasso’s life for seven years. The first of their two “homes” was in Montmartre’s Bateau Lavoir.

The area’s biggest and most shambolic artist colony, it was a rickety, 3-storey structure built on the side of a hill. Dirty and dank with twenty-five studios, all of them had to use a single water faucet. 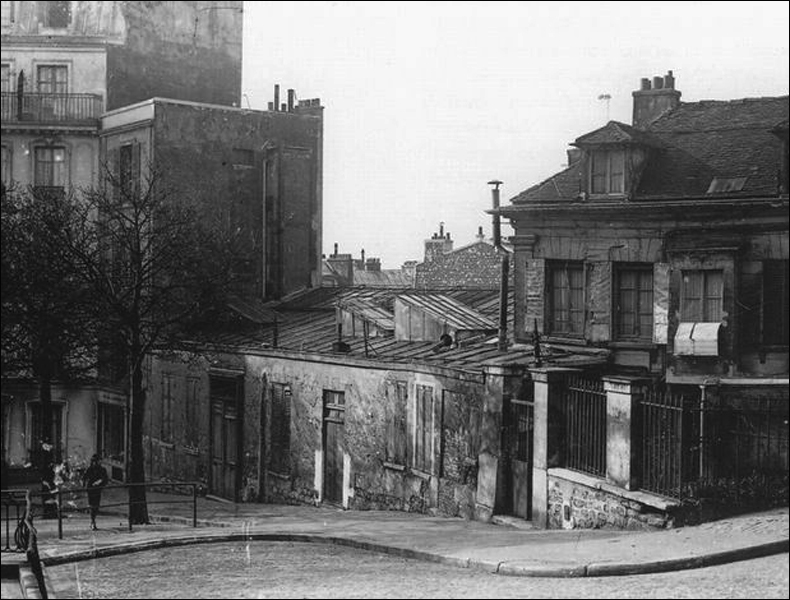 Bateau Lavoir, Montmartre, before fire destroyed most of the structure

Picasso’s world was a closeted one, focused only on his art, yet his small universe was replete with incredible characters. These stories follow their bohemian hijinks day-to-day, from card readings to poetry evenings and home-cooked meals to opium smoking. The books look at Picasso entirely through the eyes of others – not just Fernande but close friends like the poets Max Jacob and Guillaume Apollinaire. 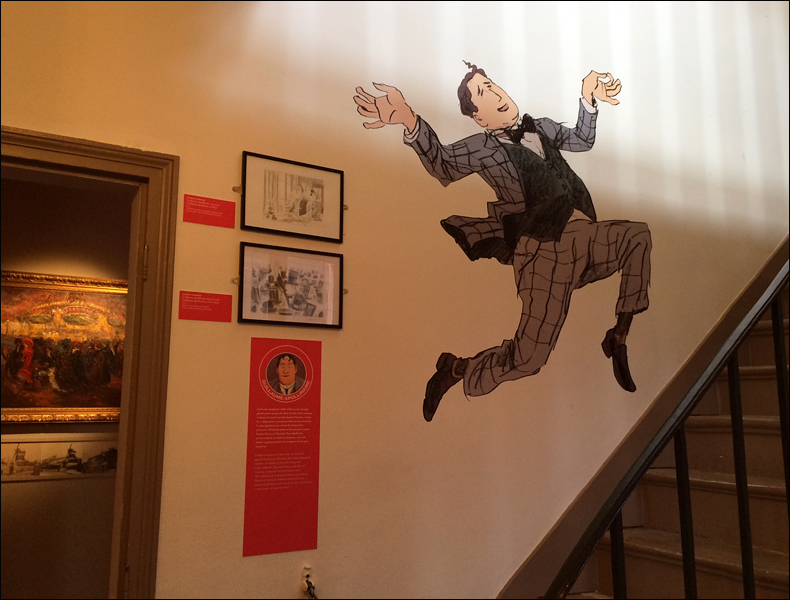 Fernande’s view, however, is the most intimate. Picasso was obsessed by her, so jealous he would hide her shoes to keep her at home. Yet she was a thoughtful muse who put up with everything; she made their home, entertained – and fiercely guarded Pablo’s privacy. All while she read and wrote and also painted on her own. 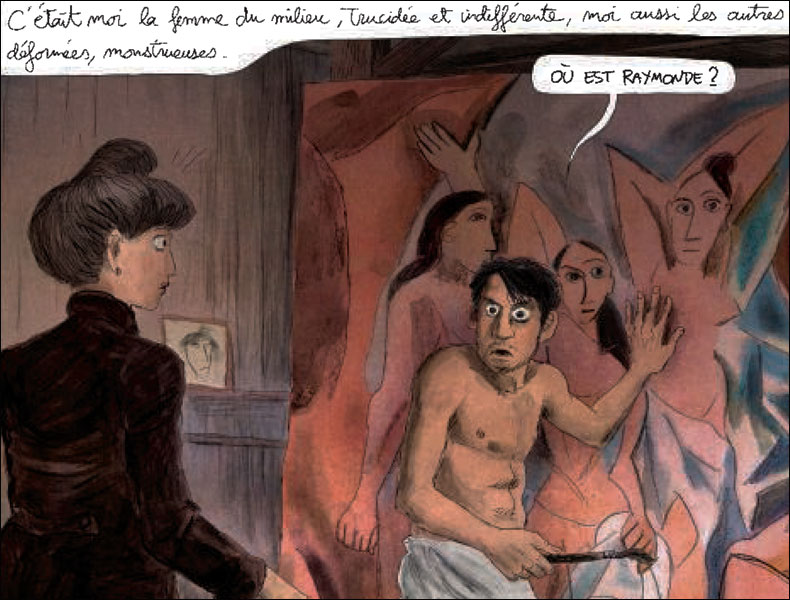 The subject of six dozen portraits by Picasso, Fernande became much more than just a girlfriend-model. She was so omnipresent in Pablo’s creative life that she informed his whole visual vocabulary. When Picasso found African art, when he looked back to the likes of Cézanne, when he came to Cubism, Fernande was already there. She became integral to the way he saw women. None of this comes over heavy-handedly in the books. It is conveyed simply, in funny but fascinating narratives. Pre-Picasso, Fernande made her living as a model and her writings give a vivid, muse-eye view of that life. All her details – the sweltering studios, long days and demanding artists – help the creators of PABLO resurrect a vanished world. 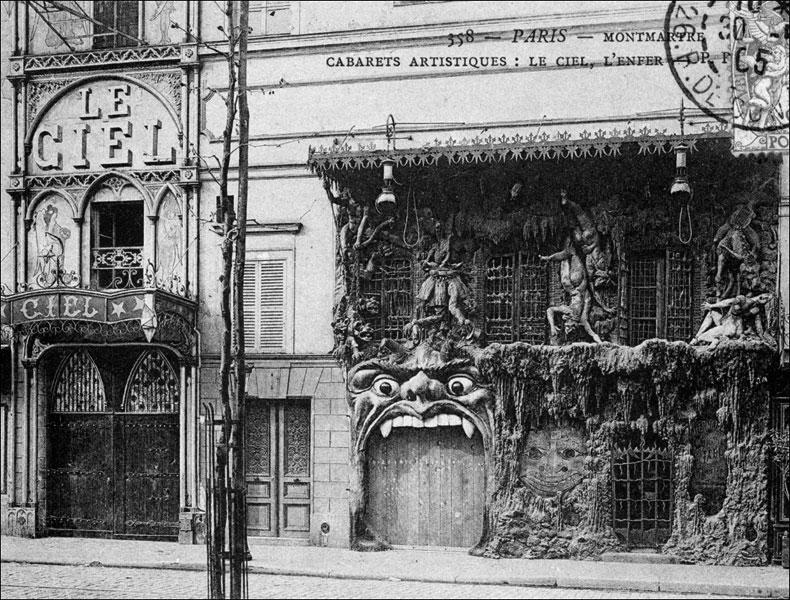 The real Cabaret de l’Enfer on a contemporary Paris postcard

One treat of the museum show is a chance to hear the real Fernande. This rare audio clip is broadcast through a vintage radio – you can sit next to it, close your eyes and listen. The voice you hear may not sound modern, but it’s full of humour and life. Despite her beauty and talents, Fernande’s later existence was hard. So her irrepressible tones are even more impressive. 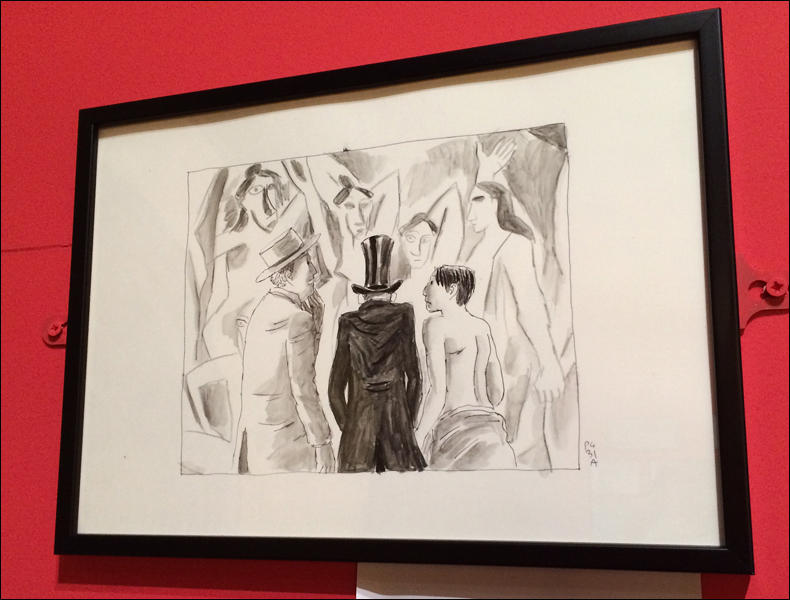 By the final pages of PABLO, the artist has found himself. But, to become “Picasso”, he leaves his friends behind. The series ends in a dreamlike sequence, with Max Jacob (who loved to tell fortunes) prophesying each character’s future. Jacob – a Jew who perished just before he was sent to a death camp – tells Fernande that Pablo loved her as he will love no one else.

But, he warns, the history of art is going to erase them. “No one and nobody,” he says sadly, “will remember you”. 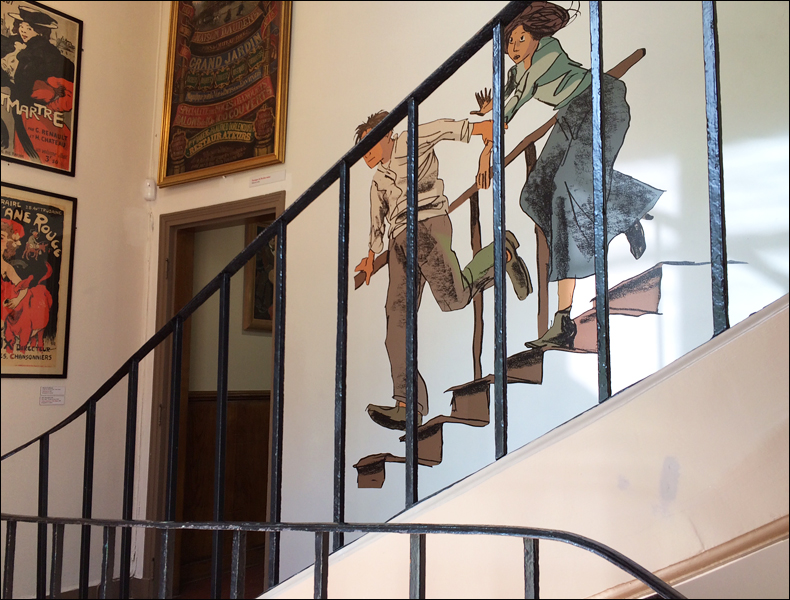 • PABLO is available in English from SelfMade Hero

• Among Fernande Olivier’s writings Loving Picasso: The Private Journal of Fernande Olivier is a great read. Pablo by Julie Birmant and Clément Oubrerie is available now in four volumes.